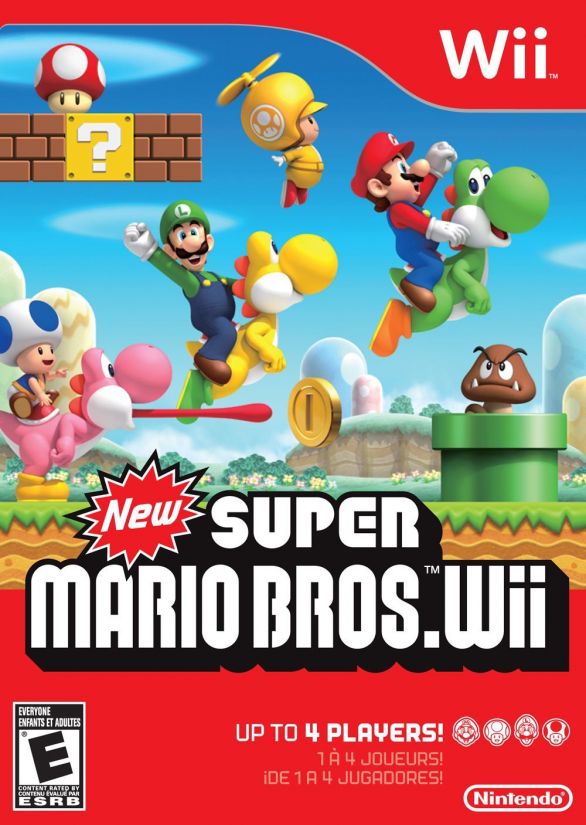 A Franchise First: Simultaneous Multiplayer
Since the very first Super Mario Bros. game took the world by storm in the late 1980s gamers anxious to get into the action have patiently and impatiently waited their turn as the infamous 'player 2.' Those are no more. In New Super Mario Bros. Wii players can now navigate the side-scrolling worlds alone as before or invite up to three others to join them at the same time, on the same level, at any point in the game for competitive and cooperative multiplayer fun. With the multiplayer mode, the newest installment of the most popular video game franchise is designed to bring yet another type of family entertainment into living rooms and engage groups of friends in fast-paced Super Mario Bros. fun.

Controller Choices Via the Wii Remote
In another nod to the series' Nintendo Entertainment System (NES) roots, the Wii Remote controller used with New Super Mario Bros. Wii is held sideways, allowing for easy, classic inputs using the D-pad to direct playable characters, the 1 button to jump and 2 button to spit out projectiles like snowballs and fireballs. In addition, players can access powerups with their choice of either the push of a button, or by shaking the Wii remote, again demonstrating the perfect merging of classic gameplay and modern game design which is New Super Mario Bros. Wii.

New Super Mario Bros. Wii offers a combination of cooperation and competition. Players can pick each other up to save them from danger or toss them into it.
Supports 2-4 players in multiplayer mode.
Mario, Luigi and two Toads are all playable characters, while many others from the Mushroom Kingdom make appearances throughout the game. Players can even ride different Yoshi characters and use their tongues to swallow enemies – or their fellow players.
In some areas, players use the motion abilities of the Wii Remote controller. The first player to reach a seesaw might make it tilt to help his or her character reach a higher platform – and then tilt it incorrectly just to mess with other players.
New items include the propeller suit, which will shoot players high into the sky with just a shake of the Wii Remote and Mario’s new ability to transform into Penguin Mario.
At the end of each stage during the simultaneous multiplayer mode, players are ranked based on their score, the coins collected and the number of enemies defeated.
Garancija: 12 mesecev